Updates to Booth John's profile since your last visit are highlighted in yellow. 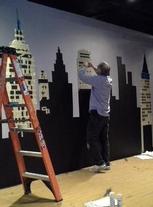 October 2009:
It seems to me that we typically want to know basic facts about our high school classmates – facts that fall into three categories:
• school and career
• family
• whatever else is particularly important to the autobiographer.

After graduation from River I attended Miami University. Because I had no real idea what I wanted to do for a career, and I suppose because those of us near the leading edge of the baby boom generation were not noted for practicality, I elected to major in theater. Impractical, but a fun way to get a degree. About a year after our high school graduation my parents moved to the Detroit area, so I was going to have to pay out-of-state tuition if I remained at Miami. Accordingly, I transferred to the University of Michigan as a junior. Between my junior and senior years, I did summer stock with the Greenfield Village Players, where I met the woman who would, a few months later, become my wife. Cheryl and I were married in January, I graduated in May, and we did another summer season of theater at the Village. By the end of that season, in September, her pregnancy was beginning to show. I’d expected to be drafted soon after school was out, but got a medical deferment for a bad back. Suddenly, it was time to get serious about earning a living to support a wife and child. The world of theater did not seem to promise a lot of job security.

A few months later I got a job as an insurance adjuster in Detroit with State Auto Insurance Company. Why? Well, it was a job. It paid a salary and I needed money. And it offered the use of a company car, besides. To my great surprise, I really kinda liked it. A few years later I accepted a small promotion and a transfer to the company’s home office in Columbus, and I am still employed with State Auto, nearly forty years later. A rather unexciting but, for me, a pretty satisfying career. I’m currently an assistant VP in the Claims Department. My oft-repeated motto at the office: “Hey, we don’t call this coming to work; we call it coming to FUN!”

Cheryl and I have been married nearly forty-one years. We had two babies, in 1970 and ’72. At about this time, Cheryl went back to school and got a nursing degree. (She’s currently a lactation consultant at Riverside Hospital in Columbus.) Jessica and Bethany turned out to be such wonderful kids and we liked having them so much that, a decade later, we had two more children. We were equally fortunate with Emily and Samuel.

Currently, Jessica is a physician and Bethany is a physical therapist. They each have four kids and a happy marriage and live within about a dozen miles of Mom and Dad. Emily is in her last year of medical school (as is her husband). Sam has an accounting degree; however, due to our recessionary economy, he is currently “at liberty” from a job standpoint, though he’s nearing completion of his second (unpublished as yet) novel.

Miscellaneous interests: We have a nice home on eight acres and have raised a variety of livestock in small quantities at various times – chickens, ducks, a pony, sheep, and even a couple pigs one year. (I personally cannot recommend pig farming, although admittedly the pork chops were delicious.)

To the likely surprise of those who knew me well in high school, I have joined the church. In high school, I was an outspoken unbeliever. Now, to somewhat to my own amazement, I find I am a pretty devout Christian. (Should probably be more outspoken than I am about that.) I’d be happy to discuss that transformation with you if you’re interested.

In the last few years, I have returned to motorcycle riding. I would have done so sooner, but Cheryl had the feminine conviction that risking death and dismemberment was imprudent for a man who had a family to support. Shortly before I turned sixty, though, she said, “Okay, you’re so old now it doesn’t matter. I’m buying you a Harley for your birthday.” Cool. Twenty or thirty thousand miles later, I’m still having fun with that.

Overall, I’ve had – so far – a life of great good fortune, filled with many blessings. I hope you are able to say the same.

September 2012:
Since keying in the foregoing, I've retired from State Auto insurance, but am working (part-time, for a stipend-sized income) as Technical Director for Curtain Players Community Theatre. See http://www.curtainplayers.org/.

I transferred to River at the start of 10th grade. I think it may have been my very first day in the new-to-me school, our first day in World History class, when Mr. Taylor called Steve Lauer to the front of the room and had him stoop over and let his arms dangle. After gazing contemplatively at Steve for a moment, Mr Taylor turned to the class and announced grandly that Steve represented the very beginning of our study of World History: the Neanderthal Man! I thought, hey, that is a pretty cool teacher. I also recall being impressed that Steve took it in good humor, because I'm sure I'd have been more than a little embarrassed.

Better late. . .have a great year, Booth. Consider celebrating our rite of passage with your classmates Sept 16 & 17!

Hey, Booth, in the theme of ships passing, you were at Miami when I was. In Theater - didn't cross paths with Education majors, I guess! Will we see you in September?

Happy Birthdayj....have a good day celebrating with your family.